Do Menopause and Alcohol Mix? 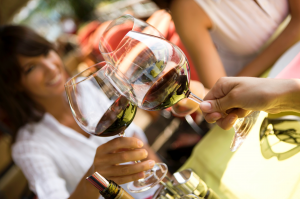 You’ve probably heard that moderate drinking is good for your heart. But you’ve probably also heard that it’s a danger for breast cancer and that it can trigger hot flashes. Here are the facts that can help you make decisions about drinking.

The most important thing is how much you drink. The benefits come with moderate—big emphasis on moderate—drinking. Starting with the Framingham Heart Study, big epidemiologic studies have shown that while moderate drinking has some benefits, drinking much more than that can be detrimental. More than two drinks per day and the negative effects begin to pile up, with increases in the rates of cancer, stroke, and more.

This is how the National Institute on Alcohol Abuse and Alcoholism (NIAA) defines one standard drink:

This is how the NIAA defines different levels of drinking for women:

How Much Is Good?

How Much Is Bad?

If you drink alcohol, enjoy yourself, but make sure your drinking is light to moderate. For women, the NIAA puts its low-risk drinking limit at no more than seven drinks a week and no more than three drinks on any single day.

Can Red Wine Reduce Your Risk for Breast Cancer?

Need to know more about alcohol and your health? Try the NIAA’s Rethinking Drinkingsite.

This entry was posted in nutrition, Blog. Bookmark the permalink.